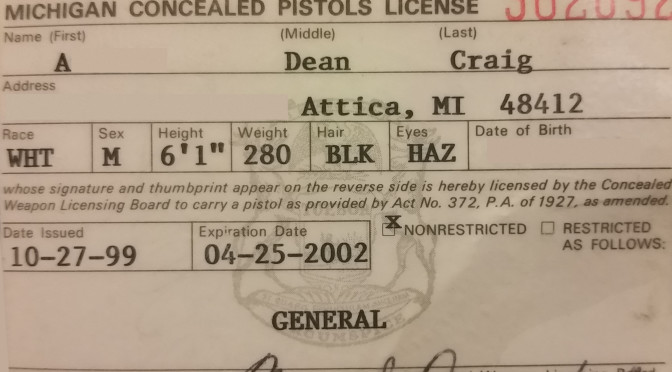 What is the difference between CCW and CPL?

CCW is a common abbreviation for the act of “Carrying a Concealed Weapon”.  Although many people think this used to be what Michigan called the license you needed to carry a concealed pistol, that is not the case. Some people think that CCW is a crime, that is also not the case, but if you do not have a permit to do so, in the State of Michigan, you can be arrested and charged with a crime IF you are carrying a prohibited concealed weapon, depending on who you are, what weapon it is, where you are, and your intent.

A concealed pistol license (CPL) authorizes the licensee to carry a pistol concealed on or about his or her person and in a vehicle (concealed or not concealed) anywhere in this state and in other states where Michigan’s permit is recognized (subject to specific restrictions commonly referred to as “gun free zones“, and except as otherwise provided by law).

In other words, a CPL (Concealed Pistol License) gives you the authority to CCW (Carrying a Concealed Weapon).

Others states use different terms for licenses or permits to carry a concealed firearm, such as a Concealed Handgun License/Permit (CHL/CHP), Concealed (Defensive/Deadly) Weapon Permit/License (CDWL/CWP/CWL), Concealed Carry Permit/License (CCP/CCL), License To Carry (Firearms) (LTC/LTCF), Carry of Concealed Deadly Weapon license (CCDW), etc. When traveling in other states you are required to follow the laws of that state.