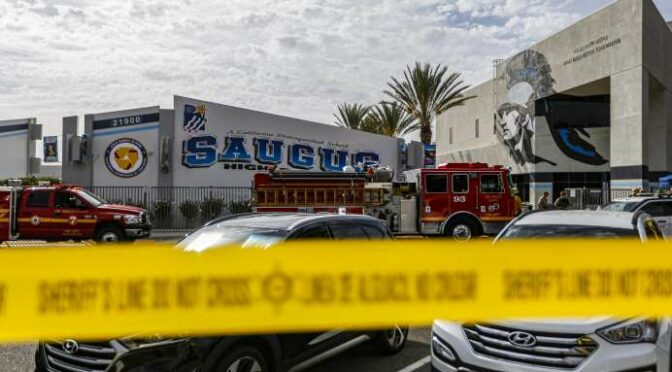 On November 14, 2019, a shooting at Saugus High School in Santa Clarita, California, resulted in the deaths of two students and injuring three more.

What can we learn from this incident?

Anywhere Anytime
This attack, like many, did not start in a classroom. Lock-downs are of little use when classes are not in session. This one started before school was in session.

You’re on your own
It was over in seconds. You don’t have time for help to arrive or go get your tools.

Guns stop
Spree killers almost always have firearms malfunctions, and when they don’t they usually reload. This shooter’s gun malfunctioned after the first round. If someone had recognized that and knew what to do, it’s possible that only one person would have died that day. If you know how guns work and have trained for scenarios like this, it is actually pretty easy to take advantage of the shooter and counter his attack.

Train Realistically
Training makes a difference. There have been multiple reports that the school has recently received spree killer response training, including medical training to stop blood loss. And the school was prepared with the proper equipment.

One teacher helped one of the shooting victims after she ran into her classroom not even knowing she was shot. Watch this great interview.

Make note of a couple of points she makes:

Of course, I wish this had never happened, I wish a 16-year-old didn’t feel like this was his solution to whatever problem he thought he had. But I also wish someone would have been armed, with the relevant training, close enough to stop the kid after the first shot.

You might not be able to legally carry in a school. But you can get some good, relevant training. Guns aren’t the only solution, even if they are one of the most efficient ways to stop a killer.